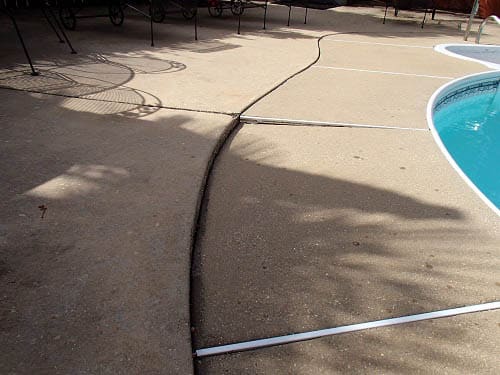 Concrete’s strength and versatility make it an ideal tool for home construction, but it’s vulnerable to breaking and cracking if the soil it’s rested on is compromised.

What Lies Beneath your broken concrete

Poorly compacted soil: When your home was built, the movement of soil around the building site results in poor compaction. Even when the replaced soil is compacted well, it’s never as stable as the original soil. Over time, this can cause voids to form and slabs to settle.

Dry soil: Another cause of soil failure is drought. During dry conditions or even just during periods of warm weather and low precipitation, the soil under your concrete will dry out and shrink, creating voids. The concrete above eventually cracks and sinks into these empty spaces; especially if any weight is placed on it.

Flooding: When the rains return, the water has an even easier pathway under the slab due to cracks and crevices left over from the dry period. And this wet, soft soil is just too weak to support the concrete above it. In the worst case, the soil erodes and washes away completely, leaving behind large voids that cannot support the weight of the concrete above.

As a homeowner, you don’t just have to worry about your own concrete slabs; you should be concerned with the slabs that make up the street that goes past your house.

During colder months, your street’s slabs contract, opening up the joints between them. Those joints then become filled with pebbles and other debris. Then, when the warm weather returns, the slabs expand again – only the joints that were designed to absorb this expansion are now filled with material that won’t compress. This leaves the expansion pressure nowhere to go except up your driveway. This “street creep,” as it is known, exerts incredible pressure on your home and can cause all sorts of problems.

In the past, repairing concrete was such a difficult problem that homeowners would pay to excavate the damaged slab and repour new concrete. Fortunately, TerraFirma’s concrete leveling technology can save you time and money by leveling out your uneven concrete typically within just a few short hours.