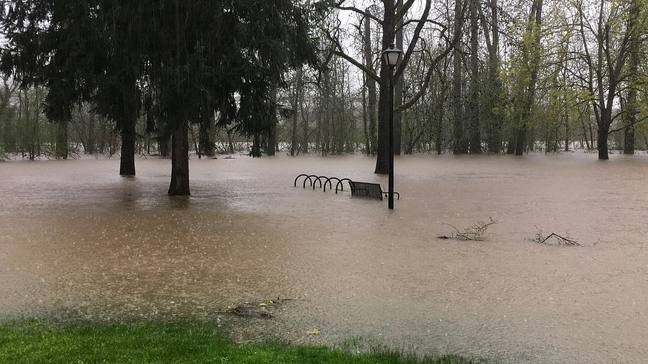 The Nation Weather Service has issued several flood warnings in Oregon, including in Douglas, Lane, Linn, and Jackson Counties.

Residents from two areas of Lane County were told by the Lane County Sherriff’s Office to evacuate immediately after the U.S. Army Corps of Engineers had to release water from a nearby reservoir amid heavy rains.

According to the Mail Tribune, a little more than 10 feet of flooding is forecasted for the Rogue Valley area. Total rainfall in the area is expected to reach 1 to 2 inches in most places, and up to 3 inches possible in the mountains.

On Sunday, a little more than two inches of rain fell at the Eugene Airport. According to the National Weather Service in Portland, Sunday was the wettest day on record for Eugene.

The rain decreased slightly on Monday, but the City of Eugene released a statement saying that Alton Baker Park and “Parts of the Ruth Bascom Riverbank Path and Fern Ridge Path are flooded… As the rain continues, we may see more areas affected.”

Stay safe and dry while the flood warnings are in effect, and make sure your home’s basement or crawl space is safe from water damage.