With its nearly 10 foot ceilings, this crawl space in Portland was incredibly vulnerable to various pests and severe water damage. After decades of worrying about if their crawl space was damaging their home, the homeowner decided to gain peace of mind, and TerraFirma provided them with a free inspection.

After a free, no-obligation inspection, we were ready to transform this nearly 4,000 square foot crawl space. We had three primary goals for this homeowner's crawl space.

First, we removed the debris and wet insulation that came with decades of neglecting the home's crawl space. Once we removed the debris, we installed a drainage system that included a Triple Safe Sump Pump®. Our TripleSafe Sump Pump® collects any groundwater before it threatens your home with water damage. The primary pump in the TripleSafe Sump Pump® can discharge 2,200 gallons of water per hour, and the secondary pump can remove nearly 4,000 gallons of water per hour!

With such a large crawl space, it was also essential to reduce the humidity as much as possible, and that's why we installed two of our SaniDry Dehumidifiers®. Our SaniDry dehumidifiers® reduce moisture, which in turn makes your home less vulnerable to mold, dust, and mildew. Along with health benefits, dehumidifiers can lower your energy costs by allowing your air conditioner to run more efficiently when removing warm air from your home.

Second, we installed a drain tile matting and a VaporLoc Elite® liner to encapsulate the crawl space and ensure that pests, mold, and odor would no longer live under the home.

And finally, we wanted to make sure that the homeowner's floors were stabilized. Since one of their wooden posts were beginning to rot, we replaced it with our galvanized steel SmartJack®.

By the end of the one week job, this homeowner was finally able to gain peace of mind over their crawl space. If you have concerns over your crawl space, don't hesitate to contact TerraFirma Foundation Systems for your free inspection! 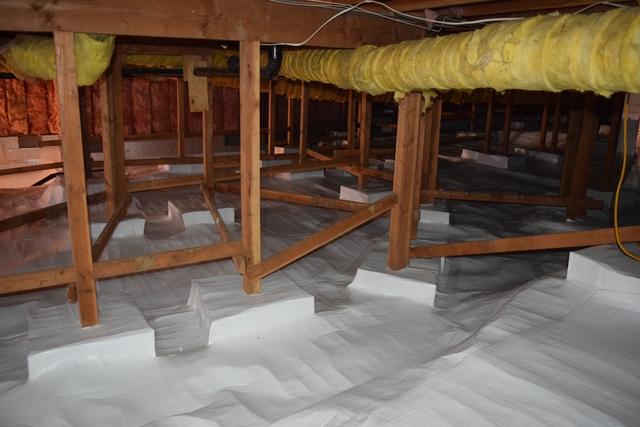 By the time TerraFirma finished, nearly 4,000 square feet of the crawl space was encapsulated and free of pests, mold, and odor. 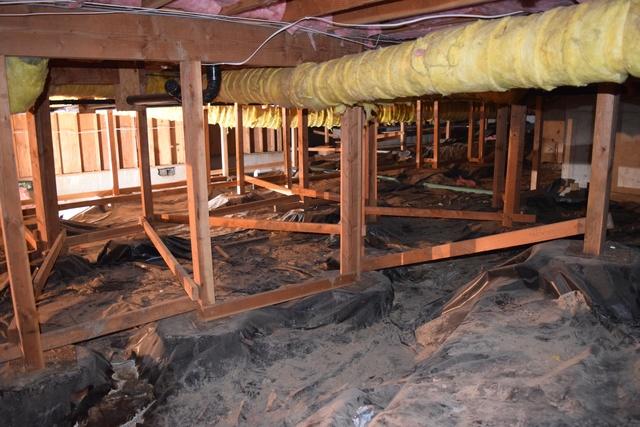 Some people would love to have such a large crawl space for storage, but if the area is not correctly encapsulated, everything you store could be damaged by water or pests.

Back to Previous Page
Back to Case Studies